November 1st marks the start of the forth open enrollment period for President Obama’s Health Insurance Marketplaces. That means from today until January 31st, an estimated 10 million Americans who had coverage in 2016 will be able to renew their health plans online and an additionally 3.5 million Americans that still lack health insurance are expected to enroll into a health plan. However, not everyone is expected to enroll through the marketplaces. In fact, another 1.1 million Americans are expected to buy a health plan directly from a health insurance company, essentially bypassing President Obama’s Healthcare.gov enrollment website altogether.

However, even with all of this expected enrollment over the next three months, 11 million people that earn too much money for Medicaid will still remain without any health care coverage in 2017. 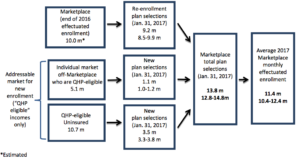 How About The Headlines?

Headlines outlining the increase in monthly costs and available options for 2017 have bombarded the media since a report was released by the Department of Health and Human Services on  October 24th. Just a few are listed below.

However, these headlines and articles only touch the surface of the true story.  In fact, the widely  reported price increases will actually only impact 3% of the entire U.S. population; roughly 10 million individuals.The vast majority of the country gets their insurance from their employer. Medical costs for most employer plans are expected to increase by only 6-8% in 2017.

Answers To Your Top Five…

1. What are the average increases in pricing for plans sold through the Health Insurance Marketplaces?

However, the increases in pricing is based on the “benchmark” plans. That is the way the website is able to determine financial assistance for Americans based on their income. Those benchmark plans are the second cheapest silver plans available to consumers to purchase. So, if every consumer selected the lowest-priced plan, consumers would actually see a -20% decrease year over year.

2. What are some examples of the highest and lowest pricing changes for 2017?

The year over year price changes below are what amounts expected by the health insurance company, regardless if it’s paid directly by the consumer or indirectly from the Federal Government. However, due to the financial assistance programs available to consumers based on their income, many Americans will not actually pay the full monthly prices listed below. 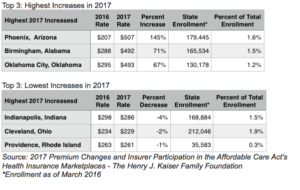 3. How does Financial Assistance help with the 2017 price increases?

4. What does financial assistance mean for the rest of the country?

The marketplaces will continue to offer affordable coverage options:

However, just because consumers can switch to cheaper plans does not guarantee they will find plans with low co-payments and deductibles. For example, many of the cheapest plans in the Health Insurance Marketplace have relatively high deductibles reaching $3,000 or more for an individual; doubled for families.

5. So, who will still lack health insurance coverage in 2017?

There are roughly 11 million people next year eligible to enroll in a health plan on the Health Insurance Marketplace but will remain uninsured in 2017.

Tune in to get monthly insights on world
events and advice on healthcare.

“The function of education is to think intensively and to think critically. Intelligence plus character – that is the goal of true education.”
— Dr. Martin Luther King, Jr.